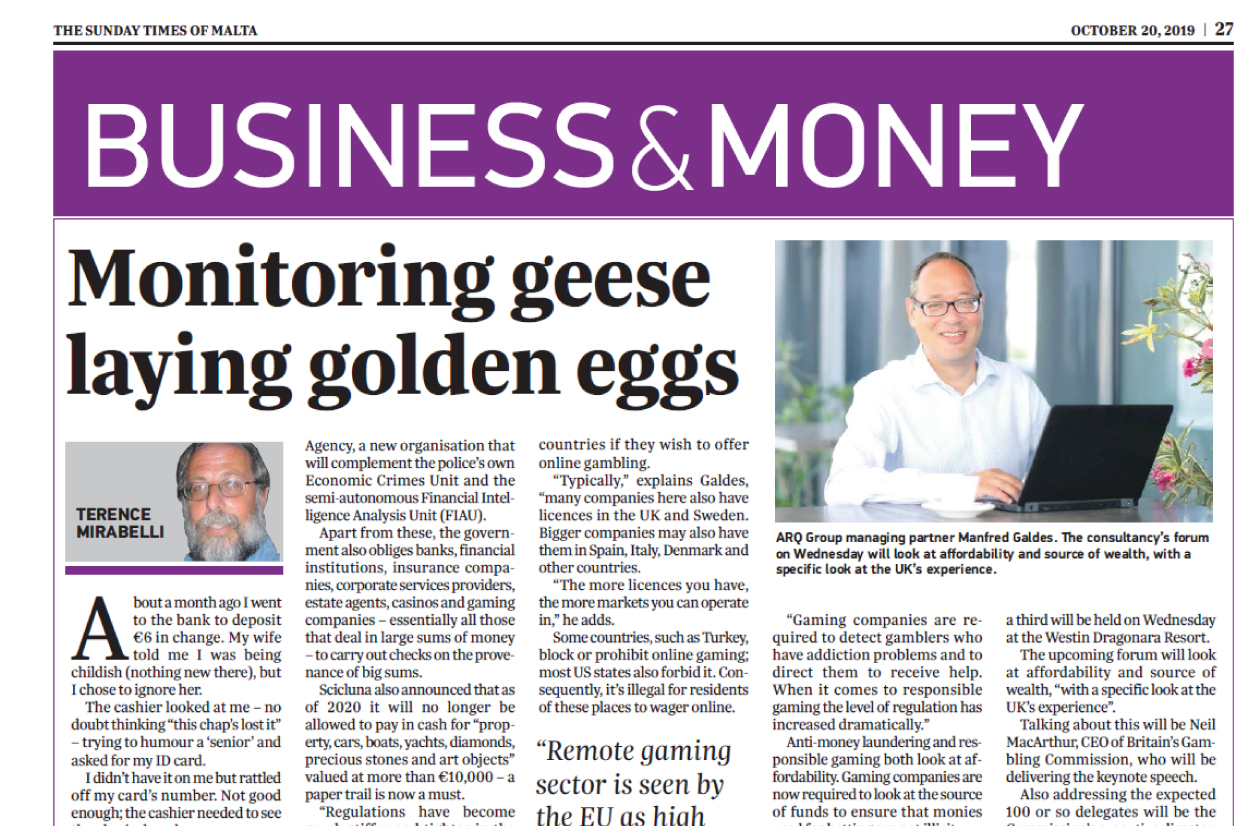 About a month ago I went to the bank to deposit €6 in change. My wife told me I was being childish (nothing new there), but I chose to ignore her. The cashier looked at me – no doubt thinking “this chap’s lost it – trying to humour a ‘senior’ and asked for my ID card. I didn’t have it on me but rattled off my card’s number. Not good enough; the cashier needed to see the physical card. “Why?” I asked. “Money laundering” was the reply.

We have become obsessed with money laundering, at least officialdom has, no matter how trivial the sums involved. The International Monetary Fund says between €715 billion and €1.9 trillion are laundered annually globally, of which some €200 billion is washed in the EU, according to Europol. However you look at it, it’s lots more than my paltry €6. This is a crime that’s showing no signs of going away any time soon, and all governments have legislation and agencies in place to combat the rising tide of money laundering.

Just last Monday, in his Budget speech, Finance Minister Edward Scicluna announced the setting up of the Financial Organised Crimes Agency, a new organisation that will complement the police’s own Economic Crimes Unit and the semi-autonomous Financial Intelligence Analysis Unit (FIAU).

Apart from these, the government also obliges banks, financial institutions, insurance companies, corporate services providers, estate agents, casinos and gaming companies – essentially all those that deal in large sums of money – to carry out checks on the provenance of big sums. Scicluna also announced that as of 2020 it will no longer be allowed to pay in cash for “property, cars, boats, yachts, diamonds, precious stones and art objects” valued at more than €10,000 – a paper trail is now a must.

“Regulations have become much stiffer and tighter in the past four or five years,” comments former FIAU director Manfred Galdes, “but these did not include the remote gaming industry until January 1, 2018”. Since then, “all anti-money laundering rules have applied to online gaming companies as well”.

The ARQ Group, a Birkirkara based consultancy that offers financial and advisory services and where Galdes is now managing partner, and partner responsiblec for risk and compliance, launched a series of forums last year to assist compliance officers
and MLROs (money laundering report officers) “to discuss common issues that arise in the gaming industry”.

A licence from the Malta Gaming Authority (MGA) is a necessity to set up shop locally, but some jurisdictions also require companies to be licensed in their countries if they wish to offer online gambling. “Typically,” explains Galdes, “many companies here also have licences in the UK and Sweden. Bigger companies may also have them in Spain, Italy, Denmark and other countries. “The more licences you have, the more markets you can operate in,” he adds.

Some countries, such as Turkey, block or prohibit online gaming; most US states also forbid it. Consequently, it’s illegal for residents of these places to wager online. Gaming companies have multiple rules to follow. “Compliance people have a wide remit, they have to look at regulatory compliance, like the MGA’s requirements and data protection,” Galdes explains. “Anti-money laundering and terrorism financing are a very big thing, and so is responsible gaming,” he adds.

“There is an obligation to ensure that gaming companies have a social conscience. They have to make sure that people who have a gambling addiction are not encouraged to bet. There are specific rules as to marketing. “Gaming companies are required to detect gamblers who have addiction problems and to direct them to receive help.

When it comes to responsible gaming the level of regulation has increased dramatically.” Anti-money laundering and responsible gaming both look at affordability. Gaming companies are now required to look at the source of funds to ensure that monies used for betting are not illicit.

The EU threshold is €2,000 – start gambling larger sums and gaming companies are obliged to run checks on whether the person gambling can afford this and on how the money was acquired. For instance, one would not expect a low-income earner to wager, say, €20,000 a pop.

Why should a gaming company care where the money comes from; their raison d’être is to make money, they’re not the morality police? “If they don’t, they become accomplices in the money laundering process,” says Galdes. The remote gaming sector is seen by the EU as high risk, and a potential conduit for dirty money, hence the checks.

In light of these developments and the various compliance requirements, each of ARQ’s forums focus on particular topics. So far it has organised two this year, and a third will be held on Wednesday at the Westin Dragonara Resort.

The upcoming forum will look at affordability and source of wealth, “with a specific look at the UK’s experience”. Talking about this will be Neil MacArthur, CEO of Britain’s Gambling Commission, who will be delivering the keynote speech. Also addressing the expected 100 or so delegates will be the Commission’s executive director, Helen Venn, who will discuss the issues of anti-money laundering compliance and the responsibilities of personal licence holders.

Independent consultant Jeremy Harding-Roberts, meantime, will look at transaction monitoring for responsible gambling and anti-money laundering, while Tom Holmes from Accuity will deal with the subject of Know Your Data. Other high-powered speakers at the forum include Tracy Cauchi from Malta’s gaming authority. “Gaming is fundamental to Malta,” says Galdes, not only as an employment provider but also as a major revenue source for the state in the form of taxes. It’s a goose that requires constant monitoring if it is to continue laying those golden eggs.

Article taken from Times of Malta (published on Sunday 20 October, 2019)